Click on the thumbnails below to access official ITG photographs from each event. Navigate using the strip of thumbnails at the bottom of the photo window.

The world premiere of Jason Dovel’s The Legend of Pandora was presented by the Non-Pro Trumpet Ensemble. The work grabbed the audience right from the beginning with a huge punch of chords and swirling motivic lines. The piece presented rich soaring melodies that were separated by small chaotic episodes and ended with exciting fanfares.

Master Class and Warm-Up with Brian Shaw at 2019 ITG Conference in Miami, Florida 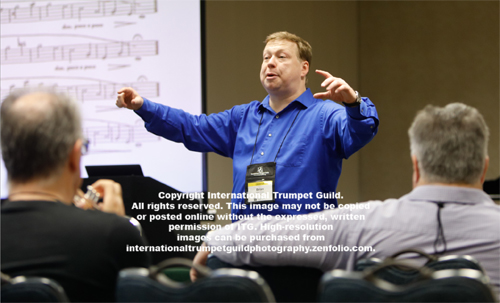 Brian Shaw led an eager crowd of comeback players through a well-rounded warm-up routine focused on ease and consistency of tone production across the range of the instrument. Shaw discussed and demonstrated the James Thompson Buzzing Basics routine, emphasizing the importance of keeping a stable embouchure when moving between pitches. The participants enjoyed playing through the exercises with play-along tracks as Shaw discussed ways to make each one effective. He explained the importance of adaptability in a warmup in order to facilitate the demands of a busy life and schedule while also covering the core fundamentals of sound, range, finger technique, flexibility, and articulation. His routine highlighted several ways to use both buzzing and lip bends to develop clarity and centering in tone. He also encouraged using a metronome and drones throughout the warmup to incorporate the skills needed to play with others, such as breathing, entering in time, and playing in tune. (EM)

Brian Shaw displayed great versatility as both a performer and educator during the masterclass for non-professionals and comeback players. Those in attendance received a wealth of excellent information and suggestions regarding ways to improve their technical and expressive capacities in music ranging from the Baroque and Classical eras to modern-day jazz and pop styles. We often make trumpet playing more difficult than it should be, and simplicity is key. Shaw stressed an awareness of the little things and focusing on the details to enhance each performance and truly capture the imagination of the audience. Other points of emphasis included utilizing technology to your advantage and creating new, unique exercises to help develop coordination and further refine performance skills. There is no reason for us not to record ourselves with all the convenient technologies available in this day and age. (AD) 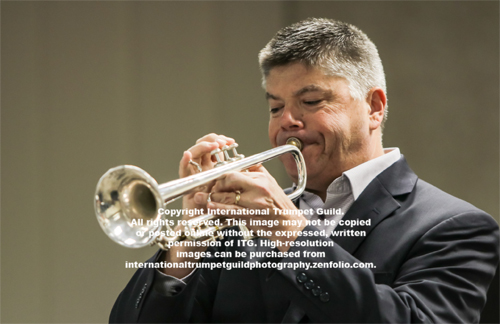 Dr. Christopher Moore presented a fantastic lecture Friday morning for the non-pro/comeback players. He opened by performing a beautiful lyrical excerpt from a Bordogni etude and then led an informative discussion focused on six essential aspects of trumpet playing. Emphasizing tone production and musical expression, Moore shared that practicing and improving fundamentals is the key to developing the ability to tell your story through music. He provided detailed information on how to approach each aspect of the trumpet. Moore was also accompanied by special guest Bryan Goff, who shared from his personal experiences of returning to the trumpet after time away from the instrument. Professor Goff shared that spending adequate time to recover and always listening to your chops are helpful tools, and he also provided tips for maintaining skills while traveling. The lecture was engaging and helpful for all musicians in attendance and a great addition to the conference. (SW)

Paying homage to legendary cornet soloist Herbert L. Clarke and pulling musical material from his solos, etudes, and exercises, Kody J. Euteneier’s Prelude and Fugue on a Theme by Herbert L. Clarke was a wonderful way for the Non-Pro/Comeback Players ensemble to celebrate one of the greatest players in our history. (WK)

Bright and early on the first morning of the conference, John Irish led an engaged audience of non-pro and comeback players through a warm-up session. Irish’s routine focused on the core fundamentals of playing in a streamlined progressive approach. The interactive presentation had the group on their feet with breathing and buzzing exercises to get the body and lips prepared to play for the day. Irish emphasized the importance of air flow, centering, and tone and demonstrated several exercises to help improve each of these areas. The handout provided offered clear explanations and straightforward drills to focus on the concepts he discussed. Irish also invited Bert Truax to share some thoughts, and both fielded numerous eager questions from the audience. Irish closed with a quotation by Aristotle reminding everyone that “We are what we repeatedly do. Excellence, then, is not an act, but a habit.” (EM)

John Irish’s masterclass served as a seamless continuation from his morning warm-up session, focusing on a centered sound, strong embouchure, and consistent airflow. Irish utilized a succinct and well-organized packet of exercises, intended to be a “home base” of practice goals and techniques for players of all levels. The majority of the masterclass featured “air flow connection” and articulation exercises, with the main goal being a strong, consistent airstream. Irish modeled these exercises and then led the audience in group performance and encouraged volunteers to play individually. One very helpful demonstration included two volunteers: one blowing into the trumpet with the other reaching over and striking the valves. In each instance, the performer’s sound noticeably improved and received instant applause from the audience. Irish effortlessly created a relaxed and encouraging atmosphere while outlining clear and practical performance objectives that surely benefited all in attendance. (MY)

David Vining, professor of trombone at Northern Arizona University, brought his engaging pedagogy and expertise on body mapping, or learning the truth of how our bodies are constructed and how we are intended to move, to promote more efficient and healthier brass playing. By focusing on replacing compromised breathing with efficient, relaxed breathing, brass players can eliminate tension in their playing while developing a quality sound and ease of playing. Vining discussed how body mapping empowers the individual to refine his/her own movements based upon personal exploration. Vining focused on the self-exploration and self-awareness needed to determine how a player’s fluid, personal balance differs from the stagnant exterior look of good posture. Vining discussed his personal journey with focal dystonia and how his knowledge of and journey through body mapping discovery helped him overcome his struggles and led to his teaching the technique as a mechanism for injury prevention. (AJ) 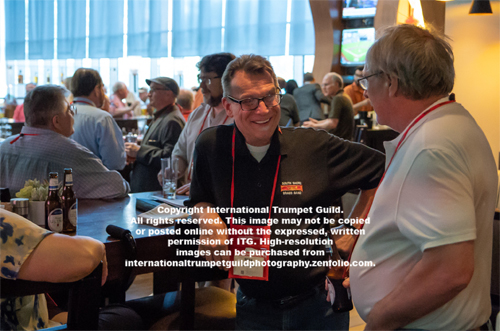 The non-professional/comeback players make up an important subset of the International Trumpet Guild. I believe that they may look forward to our annual conferences more than any other group within the Guild. For years I hesitated to call them amateurs--especially since many of them perform more frequently than I do--until I was reminded that the word “amateur” comes from “amare,” which means “to love.” These folks LOVE the trumpet!  And they love to spend time together, whether as a trumpet ensemble or at a reception at the Q Bar. Dan Hallock, chair of the  Non-Pro/Comeback Players Committee, spoke enthusiastically at the reception about events yet to be held during this week’s conference and about events already planned for the 2019 conference in Miami, Florida. ITG President Cathy Leach thanked the group for their continuing involvement in ITG. (KE) 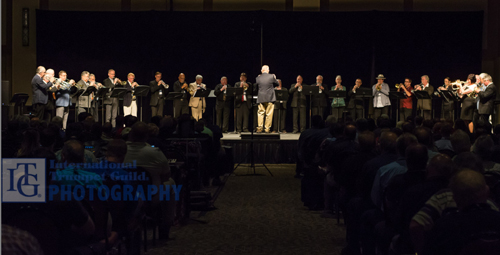 James Olcott’s The Standard was conducted by David Brown. It included both flugelhorns and trumpets and featured many qualities of a traditional march. Audience members were tapping their toes to the beat of its lovely, singable melodies.

Judith Saxton’s interactive warm-up session featured principles of the Alexander Technique. Not only was mindfulness an important topic, but she also explained “bodyfulness,” saying, “The body and mind are connected; what we think is how we move.” The process of the warm-up session began with becoming aware of one’s surroundings. This transitioned into singing, playing buzzing exercises on the mouthpiece, and, finally, performing on a fully assembled trumpet. As new steps were introduced, the question “Did you lose your feet?” followed, reminding the audience of the bodyfulness concept. Saxton discussed the importance of one’s mindset while warming up. The mindset of performers should be purposefully involved in music, rather than thinking “How do I feel today?” Singing, moving with and visualizing music before one performs on the instrument will result in a clearer, more focused sound. Saxton’s class was well received as the energy of the room evolved into a welcoming, spirited environment. (SS)

Trumpet players of all ages and playing levels gathered in the Empire Ballroom to receive constructive feedback on their trumpet playing from Judith Saxton. A variety of players found the courage to perform for those in attendance, playing a portion of a solo or etude of their choice. Saxton delivered excellent and effective advice, often referencing her extensive knowledge of the Alexander Technique. Despite the early starting time of the clinic, particularly toward the end of the conference, those in attendance were energetic and actively engaged in the question-and-answer session, creating an informative and educational environment. Although Saxton provided many valuable constructive comments, this author most appreciated her ability to give feedback on performances in an honest, yet kind, fashion. (RW)0602-0001Judith Saxton warm-up session

How to Sustain Level on Limited Practice

The Empire Ballroom was the venue for Chase Sanborn’s presentation, also called “Circuit Training for Brass Players.” While aimed at non-professional players, the concepts presented by Sanborn were applicable to trumpeters of all backgrounds and levels. By dividing a typical warm-up/practice routine into focused five- to six-minute segments, he is able to address a myriad of specific technical, musical, and time-management challenges on a daily basis. Sanborn demonstrated his warm-up routine in real time, utilizing built-in rest periods to explain a conceptual basis for each exercise. This session was well constructed for non-pro players who often struggle to find time to maintain their trumpet playing. By regularly utilizing Sanborn’s concepts, players will be able to increase significantly the efficiency of their practice time. (JC)