Jennifer Oliverio has been appointed Assistant Professor of Music at Missouri Western State University, where she will begin her duties in Fall 2022.
Oliverio is an American cornet and flugelhorn player who holds the positions of principal cornet with the Fountain City Brass Band and flugelhorn with the Athena Brass Band. Since joining the Fountain City Brass Band in 2013 Jen has been a part of five contest winning performances at the North American Brass Band Championships, five winning performances at the US Open Brass Band Championships, two UK tours resulting in podium finishes at the Brass in Concert Championships and the Scottish Open Championships, and a performance at the Midwest Band and Orchestra Clinic. She is also the reigning North American Brass Band Association cornet solo champion. In addition to her new position at Missouri Western State University, she will be returning as one of the directors for the Fountain City Youth Brass Academy. 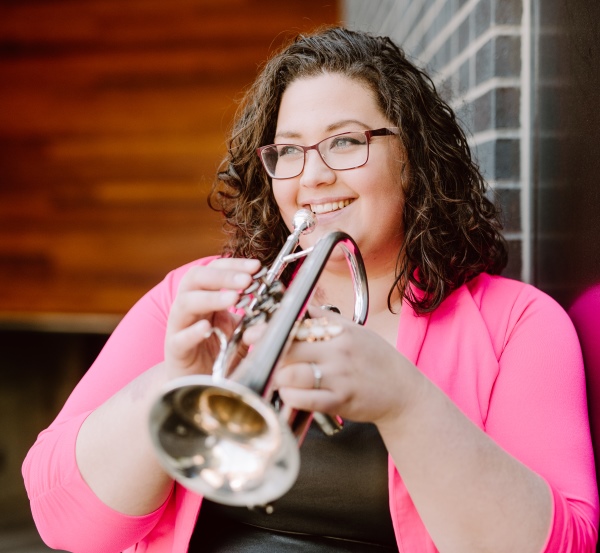 Jennifer Oliverio
She is an active soloist, having recently played an award-winning performance of Peter Graham’s Whirlwind at the 2021 US Open Brass Band Championships with the Fountain City Brass Band as well as a solo performance of Philip Harper’s A Little Star Went Out at the 2022 International Women’s Brass Conference with the Athena Brass Band. One of her recent projects has been developing a presentation titled “British Brass Band Cornet Playing for the American Trumpet Player” that was premiered at the 2022 International Trumpet Guild conference in San Antonio, TX. This presentation had garnered a great deal of interest among American bands and has resulted in a number of guest clinics and presentations across the country including with the San Francisco Brass Band, Michigan State University, and the University of Southern Mississippi.
As an orchestral musician, Oliverio has performed as an extra with the Kansas City Symphony, the Alabama Symphony, and the Colorado MahlerFest Orchestra. As a chamber musician, Oliverio is a founding member of the Trilogy Brass Trio based out of Kansas City and has performed on a number of occasions with Trilogy at the International Women’s Brass Conference.
Oliverio is an avid supporter of new music for cornet and flugelhorn, having commissioned and premiered solo works by Lucy Pankhurst, Dorothy Gates, Kevin Day, Andrea Hobson, Jen Mitchell, and Joel Collier for her premiere solo album Enigma, released in the fall of 2021. Her work on Enigma received overwhelmingly positive reviews and was nominated for the 2021 4barsrest Album of the Year and resulted in Jen being nominated for 4barsrest 2021 Player of the Year, and her being named to the 2021 Band of the Year. She has also been featured in Brass Band World magazine and and has been interviewed for the Kansas City Star newspaper and the International Trumpet Guild Journal.
Oliverio is a proud mom to her son Benjamin and wife to husband Patrick.
(Source: Jennifer Oliverio)