The Joe R. & Joella F. Utley Collection of Brass Instruments was donated to the National Music Museum in 1999. It consists of more than 600 musical instruments, highlighting 400 years of the history of high brass instrument development, manufacture and use. The first three volumes of a five-volume history of high brass, based on instruments in the Utley Collection, have already been published. Dr. Sabine K. Klaus, the Joe R. and Joella F. Utley Curator of Brass Instruments at the NMM, continues to research and write the final two volumes that will focus on cornet design and the development of the modern trumpet. Instruments from the Utley Collection are regularly featured in the Historical Instrument Window in the ITG Journal. 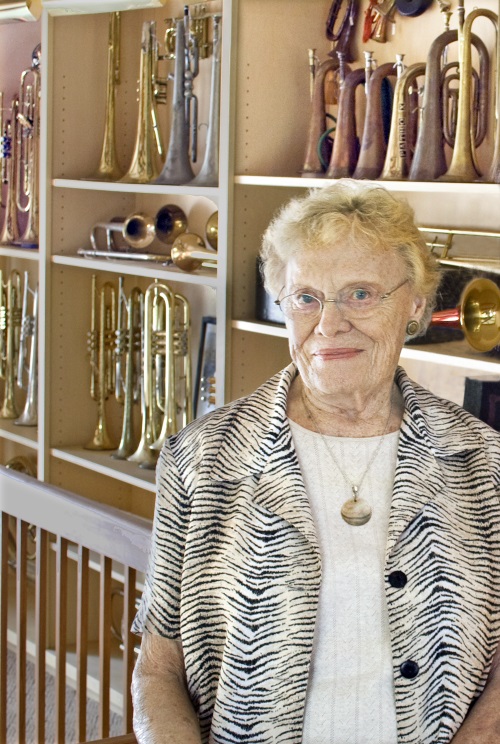 Dr. Joella Faye Jordan Utley was born on September 20, 1935, in Clinton, a small town in western Oklahoma. She earned an undergraduate degree in music education from Oklahoma State University. In 1956, she married Joe Roy Utley (1935–2001), who, after moving to St. Louis, encouraged Joella to attend medical school at Washington State University, where she trained as radiation oncologist. From 1972 to 1977, the Utleys were on the staff of the University of Kentucky Medical Center in Lexington, Kentucky, and from 1977 to 1983 at the University of California in San Diego. In 1983, the Utleys moved to Spartanburg, South Carolina, where Joella worked in the Department of Radiation Oncology at Spartanburg Medical Center. In 2007, after retiring from her medical career, Joella earned a MM degree in Music History from Converse College in Spartanburg. Joella was a long-time member of several boards of trustees, including the Brevard Music Center in North Carolina; the National Board of Advisors for the Trumpet Competition at George Mason University; and the National Music Museum in Vermillion, South Dakota, where Joella served for 20 years. At the time of her death, Joella was still writing program notes for the Spartanburg Philharmonic (of which she was a former President), the Greenville Symphony Orchestra, and the Tryon Concert Association.

Joella Utley was the president of the Utley Foundation, which has generously supported trumpet scholars at Brevard Music Center in North Carolina for many years.

A memorial service honoring Joella’s life will be held at First Presbyterian Church in Spartanburg, SC, on Saturday, July 20, at 11 am.  For additional information, see https://www.floydmortuary.com/obituaries/Joella-Utley/#!/Obituary .