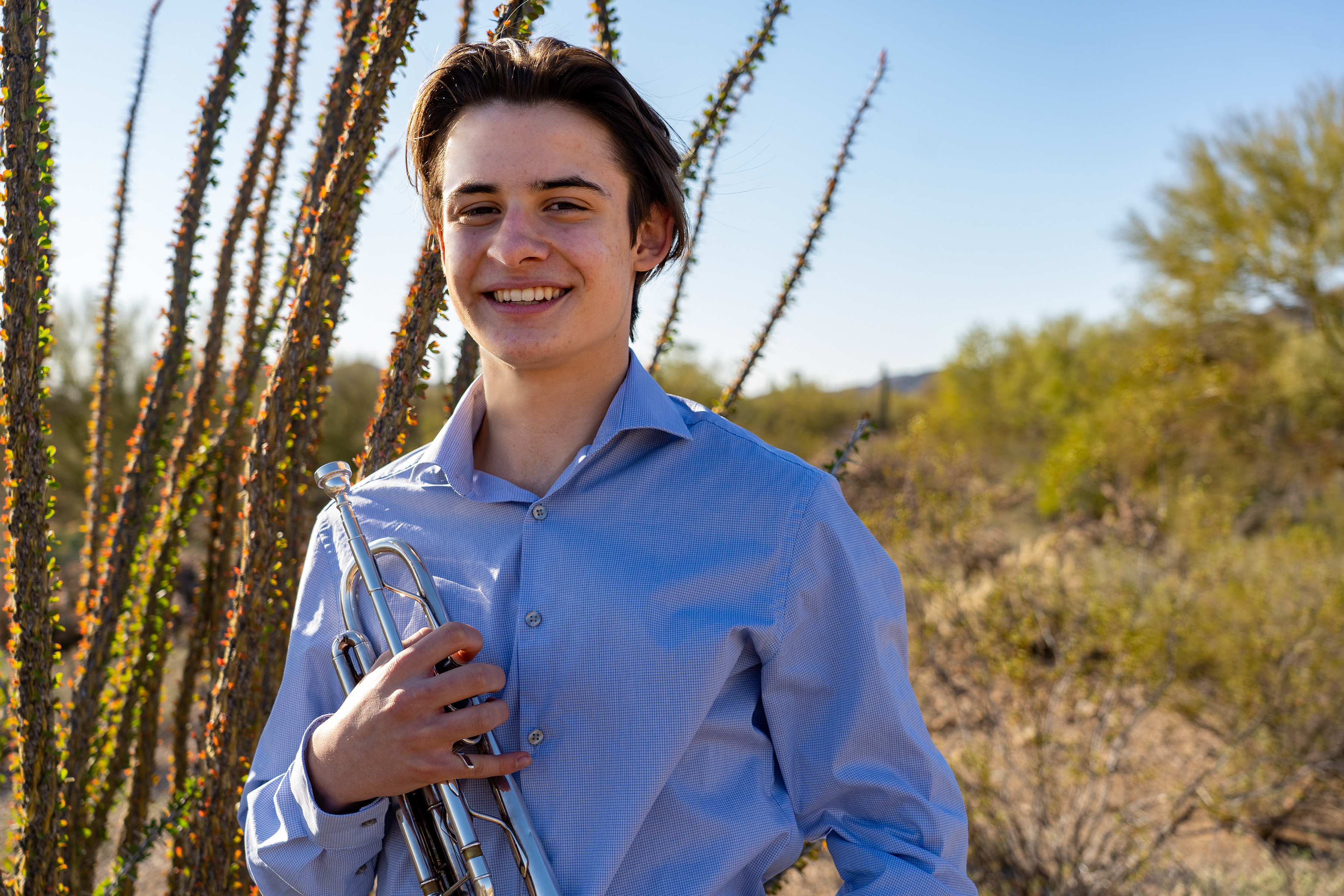 This issue’s featured young artist award winner is Jeremy Bryant, a 18-year-old trumpeter from Tucson, Arizona. Jeremy graduated from Catalina Foothills High School in May 2021 and is slated to pursue his major in trumpet performance at the Cleveland Institute of Music studying with Michael Sachs beginning in fall 2021.

Jeremy began playing trumpet at five-years-old in his elementary school’s Mariachi band program and the first five years of his playing were with this group all playing by ear. Since fifth grade, Jeremy has been studying classical trumpet with his private trumpet instructor, Betsy Bright, who performs with the Tucson Symphony. When describing Jeremy’s promise as a young trumpeter, Betsy says “his sound, style sense, musicality and intonation are already on par with many professional orchestral trumpet sections.” As a young musician, he has already gained orchestral playing experience through performing with the National Youth Orchestra of Carnegie Hall (NYO) in 2020 and 2021, performing co-principal trumpet in the Honor Orchestra of America in 2020, and performing with the Tucson Philharmonia Youth Orchestra since 2015 and serving as the principal trumpet in 2021. Other performance experience includes playing trumpet in a brass quintet with Tucson Brass Workshop from 2013-2021, performing in Interlochen's World Youth Wind Symphony in 2019, and performing in his high school’s marching band and as principal trumpet in their wind symphony. As a soloist, Jeremy performed a demanding full recital for a prominent recital series at Tucson's St Philip's in the Hills in spring 2021.
Jeremy has also competed in several competitions including the ITG Youth Solo Competition, the Tucson Philharmonia Youth Orchestra concerto competition, and All Regional and All State competitions in Arizona. He earned second place in the 2016 ITG youth solo competition and second place in the Tucson concerto competition as well in 2021. Jeremy performed with the All Regional Orchestra in 2018-2020 and performed in the Arizona All State Band in 2019. Another performance highlight from his high school career was traveling with his high school marching band to perform in the Macy’s Thanksgiving Day parade in 2019.

With his involvement in orchestral trumpet playing it is no surprise that some of his favorite trumpet artists to listen to are Bud Herseth, Phil Smith, Tom Hooten and Michael Sachs. He credits a lot of his success to his very supportive parents and the great tutelage and support he has received from his private trumpet instructor Betsy Bright over the past eight years. While most of his time is dedicated to practicing, school and work, Jeremy does enjoy skateboarding with his friends in his spare time. As the October 2021 Young Artist Award recipient, he will receive a one-year complimentary membership to ITG. Congratulations Jeremy!