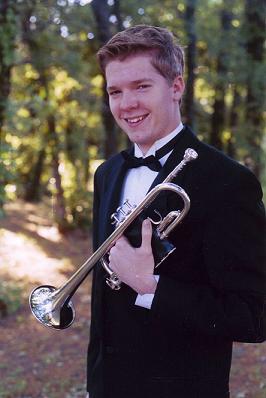 ITG is proud to announce that Daniel Watson, a freshman at Patrick Henry College in Purcell, Virginia, is the January 2006 recipient of the Young Artist Award. Daniel is majoring in political science. Originally from Fort Worth, Texas, Watson began learning the trumpet at the age of eight (as a refuge from piano lessons). It was soon apparent to his father (his first trumpet teacher) that he had a great deal of natural talent.

In 1997, at the age of ten, Daniel won his first competition. Later he became principal trumpet in the Greater Fort Worth Junior Youth Orchestra, winning a concerto contest in 2001. As a freshman in 2002, he won second place in the Winds Division of the Juanita Miller State Youth Competition, sponsored by the Texas Association for Symphonic Orchestras. He also played in the Youth Orchestra of Greater Fort Worth. He attended and competed in the Youth Competition of the International Trumpet Guild held at Texas Christian University in 2003. Daniel has made All Region, All Area, and the Texas 5A All State Band.

Daniel and his parents attribute his success as a player to the efforts of his teacher since 1999, Mr. Adam Gordon of the Fort Worth Symphony. "Mr. Gordon has the rare combination of a virtuoso performer and a gifted teacher and communicator. He takes a genuine interest in his students."

In recognition of his outstanding talent, ITG will provide Daniel Watson with a complimentary one-year membership.