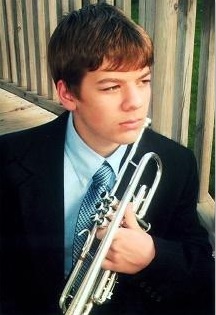 ITG is proud to announce that Caleb Hudson of Lexington, Kentucky, is the January 2005 recipient of the Young Artist Award. Caleb started trumpet studies at the age of ten, and soon began studying privately with Richard Byrd. His first solo experiences were at his church. Since beginning trumpet, he has twice won the National Trumpet Competition (Junior High and High School divisions), won first place in the 2002 ITG Youth Competition, received scholarships to the ITG conferences in Denver and Manchester, UK, was first runner-up in the U.S. Air Force Colonel George S. Howard Young Artist Competition, won first place in the Central Kentucky Youth Orchestra Concerto Competition, placed fourth in the Blount Young Artist Concerto Competition, appeared as a soloist on Public Radio International's From the Top, and received the Emerson Scholarship (full tuition to the Interlochen Arts Camp).

Caleb performed as principal trumpet of the World Youth Symphony Orchestra in the summer of 2004, and as principal trumpet of the Central Kentucky Youth Orchestra for two years. He has been the principal trumpet of the Kentucky All-State Symphonic Band for the past two years, was a member of the Advocate Brass Band of Danville, Kentucky, and has played in the Kentucky Ballet Theatre Orchestra and the Central Kentucky Chamber Players. Other appearances have included solo performances with the Lexington Philharmonic, the Central Kentucky Youth Orchestra, the Paul Laurence Dunbar Orchestra, and the Advocate Brass Band. Currently, Caleb is a junior at the Interlochen Arts Academy and is studying with Ken Larson. In recognition of his outstanding talent, ITG will present Caleb Hudson with a complimentary one-year membership.