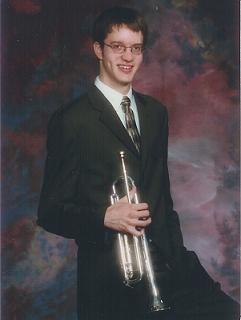 ITG is proud to announce that Andrew Bruhn, a first year performance major at the Wheaton College Conservatory of Music, is the October 2004 recipient of the Young Artist Award. Andrew is studying with Terry Schwartz at Wheaton College. He is also a student of Barbara Butler (Northwestern University), and of William Scarlett, (former assistant principal trumpet of the Chicago Symphony Orchestra). This past summer Bruhn played in master classes for Barbara Butler and Charles Geyer at Northwestern University.

Andrew Bruhn graduated from Batavia High School in June of 2004, where he was principal trumpet of his high school band for four years. While in high school he was a member of the Illinois All-State Honors Orchestra. Andrew was a principal player in the Chicago Youth Symphony Orchestra (CYSO), the Encore Chamber Orchestra, and the CYSO Brass Quintet (a semi-finalist at the 2002 Fischoff National Chamber Music Competition). Bruhn is an alumnus of the Interlochen Arts Camp, and won the Interlochen Fine Arts Award for Trumpet in 2000. He was awarded the Emerson Scholarship from Interlochen in 2003 for which he was given a full scholarship. He spent that summer playing in the World Youth Symphony Orchestra.

In recognition of his outstanding talent, ITG will present Andrew Bruhn with a complimentary one-year membership.