Organized by Edda Silvestri's AIMART Academy and its trumpet lecturer Giuliano Sommerhalder as artistic director, the second edition of the Girolamo Fantini International Trumpet Competition took place in the time-honored palazzi of the Vatican's Pontifical Institute of Sacred Music and of the Embassy of Hungary in Rome from February 17-24, 2019, with BNL-Paribas and HIND SpA as main sponsors.

In this competition, the scores obtained in all rounds add up to a final score and thus determine the ranking.

In the first round, Øistein Sommerfeldt's Divertimento Op.21 for unaccompanied trumpet as set piece had to be performed along with one of the following works: Arthur Honegger's Intrada, Jeanine Rueff's Sonatine, Vassily Brandt's Concertpiece no. 1, Gustav Cords' Concert Fantasy or Jean Françaix' Sonatine. 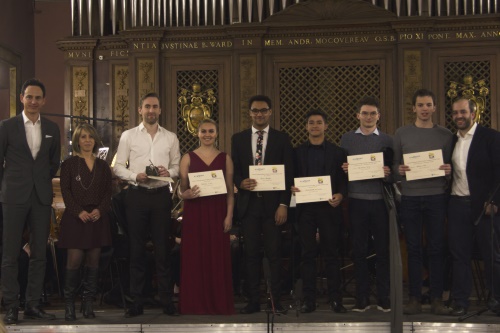 21 players, over half of the applicants, were admitted to the second round in which they were to première the work commissioned for the competition,  Vulcano Club for unaccompanied trumpet by the young Italian composer Piergiorgio Ratti, plus their choice from the following options: a selection of orchestral excerpts or any piece at their discretion (jazz, baroque or classical on historical instruments or a "freestyle" performance).

Eight players were moved on to the semifinals, and the variety of "musical self-portraits" they had chosen for the second round was interesting:  Aaron Akugbo (U.K.) and Marion Vezzosi (France) had opted for a set of orchestral excerpts from Mahler's 5th and 7th symphonies,  Strauss' Alpine Symphony, Bach's Christmas Oratorio, Mussorgsky's and Ravel's Pictures at an Exhibition, Stravinsky's Petrushka, Respighi's Pines of Rome and Verdi's Othello. The valveless Baroque trumpet in D at A=415 Hz was the vehicle for both Maximilian Morel (France) in Telemann's four-movement concerto and Andreu Vidal (Spain) in Torelli's Étienne Roger Concerto. Matilda Lloyd (U.K.) had chosen Sarabande et Finale by Raymond Gallois-Montbrun, and Philippe Préponiot (France) interpreted Hans-Werner Henze's Sonatina for unaccompanied trumpet. Two contestants presented compositions of their own: Emilia Suchlich (Germany) performed her Schön absurd (Pretty absurd), a witty patchwork of orchestral excerpts arranged for a dancing trumpeter and an (obviously stationary) double-bass player, both of whom doubled as singers, whereas Nicolas Chatenet (France) played his monumental composition Electronic Pressure for trumpet and pre-recorded tape. Other contestants had performed folk or popular music from their respective countries. The range of styles was very impressive. Playing all optional works from memory was compulsory.

The semifinal and final rounds were accompanied by the Orchestra Sinfonica Abruzzese conducted by Roman Spitzer. Of the eight semifinalists who had performed the entire Haydn concerto by memory, Akugbo, Chatenet and Lloyd were given the chance to play André Jolivet's Second Trumpet Concerto in the very final round.

Nicolas Chatenet (France) was the winner of the First Prize (9,000 euros plus an engagement as a soloist with the Orchestra Sinfonica Abruzzese), as well as of the Special Prize for the best performance in the "freestyle" category of the 2nd round (1,000 euros). Third Prizes of 3,000 euros each were awarded to Matilda Lloyd and Aaron Akugbo (both from the U.K.). The latter also won the Special Prize of 1,000 euros for the best interpretation of the commissioned piece, Piergiorgio Ratti's Volcano Club. All three laureates performed in the final gala concert.

Erick Venditte dos Santos (Brazil) was distinguished by a scholarship worth 1,700 euros for studying at AIMART.  Andreu Vidal (Spain), Marion Vezzosi (France) and Maximilian Morel (France) each won a trumpet of their choice donated by the Schilke (Chicago), Schagerl (Mank) and Cristian Bosc (Chambave) companies, respectively. 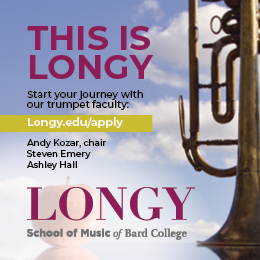