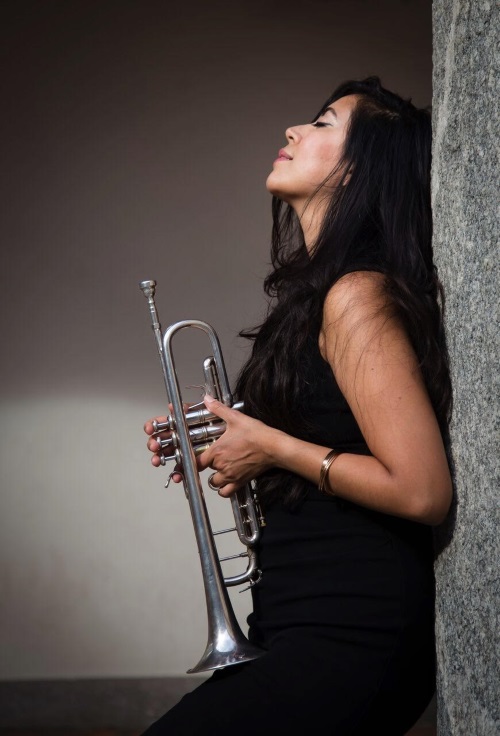 Maria Valencia was born in Guayaquil, Ecuador in a middle-class neighborhood, the youngest daughter of a middle school teacher and a labor lawyer. One of her sisters played the violin, so she wanted to play an instrument too, and after giving percussion a try, she discovered the trumpet. Initially not taking music very seriously (she was studying journalism) her life changed forever when one day, while practicing at her oldest sister’s place in Quito, someone knocked at the door. It was the neighbor from the top floor, but he didn’t come to complain. It turned out he was the founder and conductor of the FOSJE, Ecuador‘s youth orchestra inspired by Venezuela‘s El Sistema. He invited her to join the orchestra rehearsals that very week.

Soon Valencia found herself sitting in performances of Mahler’s 1st and 2nd Symphonies, among other great pieces. This orchestra also introduced her to Gaudy Sánchez, the legendary principal trumpet of the Simón Bolívar Orchestra and founder of the Latin American Trumpet Academy in Caracas, who joined the FOSJE as a guest principal trumpet. Upon meeting Sánchez, Valencia decided she was ready for the next adventure and went to live and study in Caracas.

Valencia moved to Amsterdam first, and then in Milan, where she is presently about to complete her second Master‘s Degree (in baroque trumpet) under the guidance of Jonathan Pia. She earned her first master's degree at the Conservatorio Giuseppe Verdi in Milan. She pursued undergraduate studies in Ecaudor and Venzeula.

In addition to her formal studies, she has participated in seminars and lectures held by Jean-François Madeuf, Edward Tarr and Igino Conforzi, among others.

Milan is a fertile soil for freelancers, and a very open and welcoming place for people from all over the world. The opportunities it offers to an enthusiastic trumpet player are very varied and range from opera/operette productions to performances on historical instruments as well as symphony, Latin American music and chamber music performances. Valencia performed over a hundred opera performances with the Orchestra 1813, as well as several symphony concerts with the Milan "Giuseppe Verdi" Symphony Orchestra.

Valencia plays on a Baroque trumpet built by Cristian Bosc, on which she has given a solo recital in Cuenca, Spain (with an organ from 1500), as well as performances with the Padua Baroque Orchestra and the Academia Montis Regalis. She will perform Benjamin Thorn's Croutons 14 for natural trumpet on the New Works Recital of the 2019 International Trumpet Guild Conference in Miami, Florida.