ITG selected Marsalis for the award in 2016 but did not have the opportunity to formally present the plaque until this week. This Award was established by the International Trumpet Guild for the purpose of recognizing “those individuals who have made extraordinary contributions to the art of trumpet playing.” These contributions are through one’s performance, teaching, publishing, research, and/or composition.

Wynton Marsalis is an internationally acclaimed musician, composer, bandleader, educator and a leading advocate of American culture. He is the world’s first jazz artist to perform and compose across the full jazz spectrum from its New Orleans roots to bebop to modern jazz.

By creating and performing an expansive range of brilliant new music for quartets to big bands, chamber music ensembles to symphony orchestras, tap dance to ballet, Wynton has expanded the vocabulary for jazz and created a vital body of work that places him among the world’s finest musicians and composers.

Wynton was born in New Orleans, Louisiana to Ellis and Dolores Marsalis, the second of six sons. At age 17 Wynton became the youngest musician ever to be admitted to Tanglewood’s Berkshire Music Center. Despite his youth, he was awarded the school’s prestigious Harvey Shapiro Award for outstanding brass student. Wynton moved to New York City to attend Juilliard in 1979. When he began to pick up gigs around town, the grapevine began to buzz. In 1980 Wynton seized the opportunity to join the Jazz Messengers to study under master drummer and bandleader Art Blakey. It was from Blakey that Wynton acquired his concept for bandleading and for bringing intensity to each and every performance.

Wynton’s love of the music of Bach, Beethoven, Mozart and others drove him to pursue a career in classical music as well. He recorded the Haydn, Hummel and Leopold Mozart trumpet concertos at age 20. His debut recording received glorious reviews and won the Grammy Award® for “Best Classical Soloist with an Orchestra.” Marsalis went on to record 10 additional classical records, all to critical acclaim. Famed classical trumpeter Maurice André praised Wynton as “potentially the greatest trumpeter of all time.”

In 1987 Wynton Marsalis co-founded a jazz program at Lincoln Center. In July 1996, due to its significant success, Jazz at Lincoln Center was installed as new constituent of Lincoln Center, equal in stature with the New York Philharmonic, Metropolitan Opera, and New York City Ballet – a historic moment for jazz as an art form and for Lincoln Center as a cultural institution. Wynton Marsalis has devoted his life to uplifting populations worldwide with the egalitarian spirit of jazz. And while his body of work is enough to fill two lifetimes, Wynton continues to work tirelessly to contribute even more to our world’s cultural landscape. It has been said that he is an artist for whom greatness is not just possible, but inevitable. The most extraordinary dimension of Wynton Marsalis, however, is not his accomplishments but his character. It is the lesser-known part of this man who finds endless ways to give of himself.

The ITG is proud to present this prestigious honor to Wynton Marsalis. 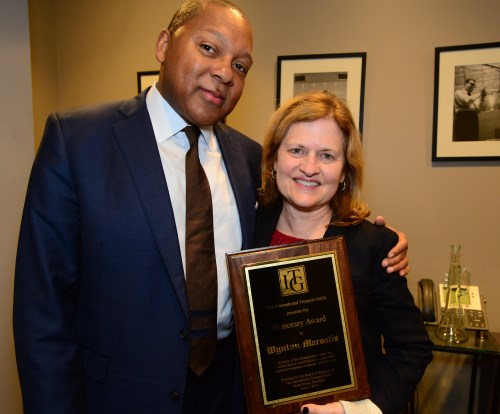