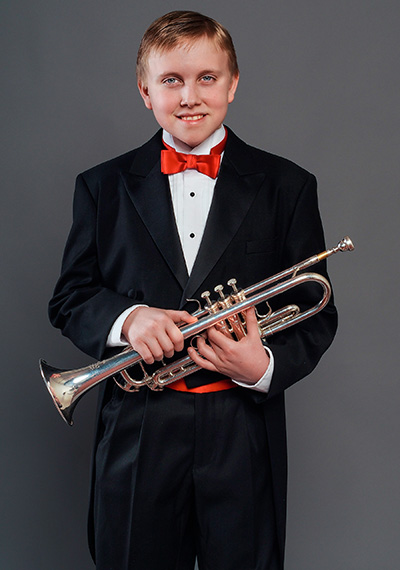 One of the most celebrated young musicians in the world today, fourteen-year-old Geoff Gallante found his older brother's trumpet at age four and has since performed on prominent stages and alongside distinguished artists all over the United States as church soloist; featured jazz performer; national anthem performer; and acclaimed soloist with concert bands, brass bands, and pops orchestras.

Gallante has not only performed in 34 states; he has played with five different US military ensembles and with various nationally acclaimed groups. By the age of six, he had already garnered guest soloist engagements with such groups as the Louisville Orchestra, the Duke Ellington Orchestra, and the Philadelphia Brass Quintet, among others. As a National Anthem performer, Gallante has appeared at sixteen pro-sports venues across the country, seven MLB stadiums, eight NBA arenas, and one NHL arena. At six years old, he became the youngest instrumentalist ever to perform at either the White House or the Kennedy Center in Washington, DC. Gallante's network TV appearances include The Tonight Show with Jay Leno, NBC's Today Show and the CBS Early Show.

In addition to solo engagements with professional pops orchestras in Kentucky, Massachusetts, Illinois, Indiana, and New Jersey, Gallante has soloed with some of America's finest symphonic bands. Most notably, he has performed with the US Naval Academy Concert Band, Ridgewood (New Jersey) Concert Band, Allentown (Pennsylvania) Band, Wheaton (Illinois) Municipal Band, Compton Heights (St. Louis) Concert Band, Ames (Iowa) Municipal Band, Plano (Texas) Community Band, Naples (Florida) Concert Band, Fond Du Lac (Wisconsin) Symphonic Band, Northwinds Symphonic Band (Georgia), and Metropolitan (Boston) Wind SymÂ­phony. In 2012, at age eleven, Gallante was honored with a guest soloist appearance at the annual convention of the Association of Concert Bands in Poughkeepsie, New York. In July of 2014, he also had the distinction of performing as guest soloist at the Texas Bandmasters Convention, the largest of its kind in the world.
In the jazz realm, Gallante is comfortable playing all styles, from traditional New Orleans style to small-group straight-ahead jazz and classic big band and swing. As a 'traditional' jazz player, he is a member of the DC-based award-winning Capital Focus Jazz Band. As a big band trumpeter, he plays in the Blues Alley Youth Jazz Orchestra. The former is geared toward college-age musicians, and the latter toward high school musicians; Gallante's talent has obviously trumped the age requirements of those two groups, as both made exceptions to welcome him at just nine years old.

As the March 2015 Young Artist Award recipient, he will receive a one-year complimentary membership to ITG. Congratulations, Geoff! 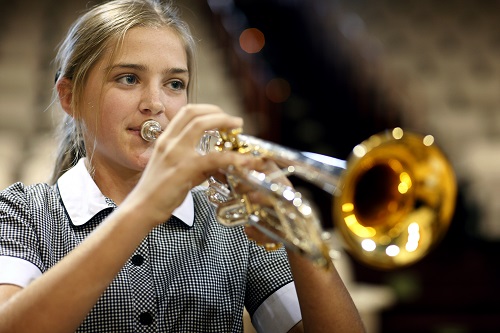 Sophie Spencer is fifteen years old and attends Abbotsleigh School in Sydney, Australia, on a full academic scholarship. She plays trumpet and sings in several Abbotsleigh ensembles and in various school musicals. She has been learning trumpet since 2006 and has studied with David Elton, James Brice, and Brian Evans.

Sophie is passionate about her trumpet playing and has been a member of the nationally acclaimed Castle Hill RSL Youth Wind Orchestra for the past five years. In 2013, she joined the Sydney Youth Orchestra Philharmonic on trumpet. She plays soprano cornet with Warringah Brass Band and successfully auditioned for a soprano cornet chair in the 2013 National Australia Brass Youth Band, under the baton of Professor David King.

Sophie performed in the 2013 Australian Concerto Competition and was named the â€œMost Promising Brass/Woodwind Peformers for the competition. She won the Brass Instrument Solo (18 years and under) division of the 2013 Sydney EisÂ­teddfod. She was a semi-finalist in the 2013 102.5FM Young Virtuosi/Young Performers Awards, and her 45-minute program was broadcast on 2MBS-FM. She was a finalist in the 2013 NSW Secondary Schools Concerto Competition and was awarded the Kuringai Philharmonic Orchestraâ€™s Players Award in the finals.

Sophie successfully auditioned on trumpet for the 2014 Australian Youth Orchestraâ€™s National Music Camp and spent an exciting fortnight working with like-minded passionate musicians, performing Stravinskyâ€™s Petroushka and Haydnâ€™s Symphony No. 104 under the baton of Alexandre Bloch. Sophie performed with the Australian Youth Orchestra in the July 2014 season under the baton of Simone Young.

A versatile musical talent, Sophie has attained advanced standing on piano, violin and viola and is currently in her eleventh year with the Australian Girls Choir. She represents Abbotsleigh in netball, softball, basketball, and touch football and also plays club netball. She has completed her bronze and silver Duke of Edinburghâ€™s Awards and is hoping to attain the gold award.

When she was eleven years old, Sophie attended the 2010 ITG Conference in Sydney, Australia, and placed second in the ITG Youth Competition. She still talks of her wonderful ITG experience and hopes that she will one day have the opportunity to attend another ITG conference. Sophie is honoured and humbled to be the recipient of an International Trumpet Guild Young Artist Award. 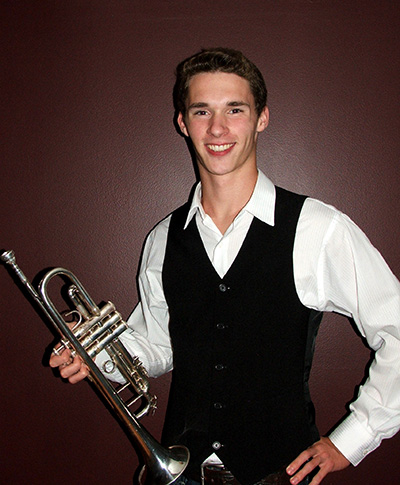 Brent Proseus is currently a senior in high school and has distinguished himself as an excellent trumpet player and musician in both classical and jazz genres. He won ITG Conference Scholarships in 2013 and 2014, and he won the third-place prize in the Senior Division of the ITG Youth Competition in 2014.

Brent’s first trumpet teacher was his father, Eric and since the seventh grade Brent has continued his studies with Gregg Good. As an eighth grader, Brent was principal trumpet in the Michigan Junior High All-State Band. In his sophomore year, he was principal trumpet in the Michigan All-state Orchestra and in his junior year, he was lead trumpet in the Michigan All-State Jazz Band. He won a featured soloist award at the Michigan Youth Arts All-State Competition and will solo with that orchestra at the gala concert. Currently, Brent plays in his high school concert and jazz bands with the West Michigan Homeschool Fine Arts. He has also contributed to the Grand Rapids community by playing in the Grand Rapids Youth Symphony since the eighth grade, holding the co-principal or principal position.

In the Michigan State Solo and Ensemble Festival, Brent has achieved the highest ratings and scores throughout his junior high and high school years. As a sophomore, he received a perfect 100% score, playing the first movement of Henri Tomasi’s Trum­pet Concerto. As a junior, he performed Jolivet’s Con­certino at Michigan State Solo and Ensemble Festival. Besides classical trumpet honors, Brent has also won many awards in jazz, including the Hastings Jazz Festival soloist award and the Western Michigan University Jazz Festival lead trumpet and soloist awards. Brent also placed third in the high school division of the Grand Valley State University International Solo Competition, after his freshman year.

Outside of music, Brent loves academics, is active in his church and enjoys drawing. He plans to pursue trumpet performance as a career. As the June 2014 Young Artist Award recipient, Brent will receive a one-year complimentary membership to ITG. Congratulations, Brent! 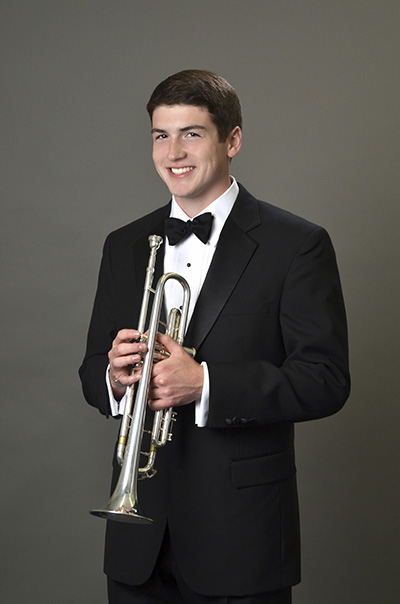 Luke is principal trumpet in the Lakota West High School Symphonic Winds and trumpet section leader for the Lakota West Marching Firebirds, both under the dir­ection of Greg Snyder. This No­v­ember, he will march with the Firebirds in the Macy’s Thanksgiving Day Parade. Luke is also a two-year member of the College-Conservatory of Music Preparatory Department Brass Choir, directed by Paul Hillner, and is currently principal trumpet with that group.

Luke served as principal trumpet for the 2013 Ohio All-State Band and has been accepted as a member of the 2014 Ohio All-State Orch­estra. In 2013, he was a finalist in the high school division of the Nat­ional Trumpet Competition, held at George Mason University. During his sophomore year, he per­formed at the prestigious Midwest Band and Orchestra Clinic with the Lakota West Symphonic Winds. He has also twice perform­ed in the Lakota West Pit Orchestra, playing for such musicals as The Music Man and All Shook Up.

Luke plans to major in trumpet performance next year. In his free time, he enjoys running, weight­lifting, and listening to music. He also plays electric guitar in his church worship band. He is very thankful for the support of his parents and family and feels very fortunate to have such accomplished mentors. As the June 2014 Young Artist Award recipient, Luke will receive a one-year complimentary membership to ITG. Congratulations, Luke! 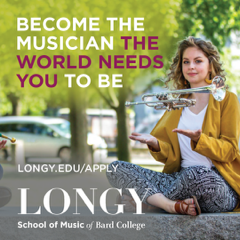