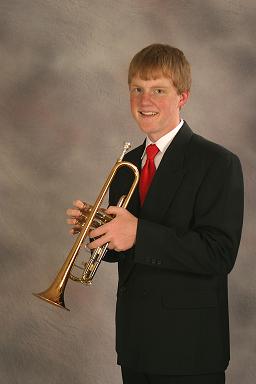 It is with great pleasure that we introduce Ryan Beach as the June ITG Young Artist recipient.

Ryan was born and raised in Lincoln, Nebraska. He studied privately with Dennis Schneider, long time professor of trumpet at the University of Nebraska - Lincoln and principal trumpet of the Lincoln Symphony. He attended Lincoln High School where he was under the direction of Mr. Terry R. Rush. He is now attending the Wanda L. Bass School of Music at Oklahoma City University studying with Michael Anderson in pursuit of a trumpet performance degree. At OCU he is a member of the Wind Philharmonic and the Freshman Brass Quintet.

At Lincoln High, Ryan was section leader and featured soloist in the marching band, principal trumpet of the Symphonic Band and Orchestra, and shared lead duties in jazz band. In 2002, he traveled to London where the band marched in the New Year's Day parade and the Symphonic Band performed in concert at Westminster Central Hall. He had the privilege of performing in the pit orchestra of Cole Porter's Anything Goes, and Andrew Lloyd Webber's Joseph and the Amazing Technicolor Dreamcoat. He had the opportunity to perform A Trumpeter's Lullaby with the Symphonic Band as well. Ryan was the 2006 recipient of the Louis Armstrong Jazz Award.

Ryan has been active in the community, volunteering at Arts Incorporated and his local church. He was a student member of the Nebraska Trumpet Ensemble and regularly performed with the group from 2002 - 2006.

In recognition of his outstanding talent, ITG will provide Ryan Beach with a complimentary one-year membership.